Yoga, the crisis and why we live in the best possible world

The central idea of yoga is that of a possible transformation of our whole being into a greater awareness, understanding and love.
How to do that? One option, more or less our default setting, is to see everything from the inside out as seperate from ourselves. And mostly we emphasise all that is wrong and missing and act out of that noticing.
The other, let’s say ‘yogic’ way, is to see everything including oneself as part of this one moment with no separation whatsoever.

Or: we can always explore a little further and open up to greater, and even better and more wholesome possibilities.
For that to happen the attachment to the past, our accumulated beliefs and restricting habits have to make way…and that usually goes along with some shaking, resistance and turmoil bcause the past has become our Self identity of the present. It seems that we experience this process at the moment also on a collective level through the current crises.
The so called “past” forms the present condition which soon becomes the past again.
For something fundamentally to change, a process of integration has to happen — a kind of reconciliation. This starts with introspection and noticing through conscious awareness our own inner mechanics, tendencies and reactions. And one allows it to be seen and felt. In a sense we could call it a form of Meditation. A more holistic view of awareness can then be accessed, which operates from a different and “higher” level of consciousness from were the “problem” originated.

The joy of blaming

The first step is to see the habitual tendency of the mind to focus on the negative and the almost joyful addiction of blaming and complaining.

It is easy to critisize and to know everything better, pointing the finger to the parents, the family, the partner, the boss, the neighborhood, the state, the Government, the politicians, the world in general or even the Universe; and to complain how silly and stupid the world and the other humans are and how unconscious everybody is (thats the „spiritual” stance)…anyway, the list is endless and the suggestions how the world should be and how it should become „better” also.
Not to say that there is nothing wrong or nothing to improve or to change, not at all, but the starting point could be first to acknowledge in ourselves how difficult it is to change our own thinking, feeling and behaving.

So, from the yogic perspective a crucial question to ask is:
What really is the relationship between the so called observer and the things observed?
Do we look from the inside out, judging all what is „wrong”?
Or do we have at least a glimbse of recognition that each of us is also part of the whole and that we also carry and share inside of us, at least potentially, all that we percieve in the “outside”? For that a personal Path, or Sadhana, a spiritual practice, which allows for more and more introspection is recommended.

Here in the words of Thich Nhat Hanh, a Zen Buddhist Monk:

If that’s the case an expansion of consiousness is possible and letting go becomes a sacrificial act, not out of resistance and repulsion but of understanding, love and gratefulness.
This is Self-knowledge in yogic terms.

A good starting point is to consider that:

How do we know that?
Because it is the world we are living in! This may sound simplistic but at the core it contains a deep appreciaton and recognition of the connectedness of us as human beings. The recognition is this; WE have created this world in a collective, although often unconsious process.
That it is now the world we are experiencing, and through this participation we are also upholding the “world” from moment to moment through and in our awareness. And it is the world of the people who were here before us and who were basically struggling with the same issues like we do now. It is quite safe to assume that they tried to do their best to make it through life, the same as we try today.
So, even from the start, are we able to see and appreciate that?

In the ancient Yoga Sutras of Patanjali one of the foundations of change is not rejection but contentment (Santosha) and acceptance, out of which a positive energy eminates which becomes the catalyst for action.

On a personal level this could simply mean to first reconcile and heal our own past: issues with the parents, the childhood, our upbringing, our relationship with authority and power (well, mostly parent issues again…) and dare to look what depth psychology terms “the shadow”…

Maybe that is also the gift of the current situation: a still place of withdrawel, reflection and forced inward movement. An oppurtunity to see what is, and out of that to see more clearly what is really important…and what not.

Action or Reaction
Action out of that understanding comes from a nonreactive and creative place in us, a place of conscious awareness and Stillness.
We are able to see better the functioning of the mind with all it’s reactions, judgments, blamings and strategies of avoidance. And the strong believes it creates; intimately tied with strong emotions in the eternal search for security and safety through its own projections.
The acknoledgement of the „old” ,the seen, allows the „new” to emerge.
On a collective level we maybe see more clearly that we created a world which is wonderful, but also in many respects unsustainable, crude and violent.
When all that is clearly seen and accepted – the whole spectrum from the deepest black to the shiniest of white – one is able to let go and sacrifice habits and patterns which are no more useful and the whole outlook on life becomes transformed.

But it has to start from each of us…
Apparently through that, something new can be born beyond the already known and defined…
Or as the famous saying attributed to Ghandi goes:
“Be the change you want to see in the world”
At the same time one could add from the yogic view:
Be simultaneously the unrestricted unknown miracle beyond all worlds and times… 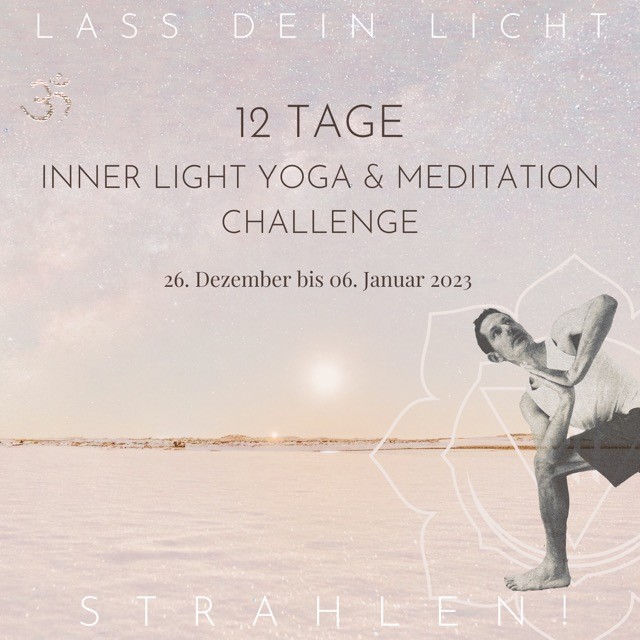